What strikes as the first picture when you think of the legend called Amrish Puri? Mogambo in his trademark style miming his famous lines? Or a Badass Balwant Rai making Sunny Deol run for his life? As epic a villain as he was throughout his life, there’s one aspect of his career we really shouldn’t be ignorant of, his complete acting ability.

Amrish Puri has always been an actor par excellence and he has his work to warrant the very fact. While he of course is labelled as the greatest villains of world cinema, we pick 5 of his best performances where he let his villainous avatar take a back seat.

Also Read: Mr. India: A Gem That Treasured Our Childhood

Here are Amrish Puri’s  top 5 roles where he played positive and still won our hearts:

At number 5 is Rajkumar Santoshi’s China Gate where Amrish played Colonel Keval Krishan Puri. A court marshalled officer who is on a redemption mission to catch a deadly dacoit along with fellow veterans, this performance by Amrish Puri stood as a backbone to the film. He laid his influence all over the film with occasional laughter, gritty emotions and perfectly sketched character that made China Gate a better affair than it normally would have been. At number 4 is India’s most loved romantic drama ever made DDLJ. While Amrish was at the receiving end of a lot of feminists for having played a socially regressive character of Chowdhary Baldev Singh, a redundant father who wants his daughter to marry where he wants, it still ranks as one of his best characters ever. At a time when Puri was unprecedented villain of the industry, he did this emphatic portrayal of an Indian father that probably went down as one of film’s most highlighting aspect. As much as we love DDLJ for Shah Rukh and Kajol, Amrish Puri’s worthy contribution can never go unnoticed.

At number 3 is Subhash Ghai’s Pardes that made him be a highlight of the movie above most of the stalwarts already in the fray. Pardes had him play a character that was socially rooted to the Indian values but was personally based in the US. Carrying along different shades in the character, Kishorilal in Pardes laid a very strong impact. His confrontational scenes with SRK will forever be considered as some of the most strong moments of the late 90’s.

Whoever’s seen this yet another Rajkumar Santoshi action drama in the late 90’s would normally remember this film for Sunny Deol’s land mark display of raw action and epic dialogues. With someone like a Danny Denzongpa taking care of the negative end, Amrish Puri was seen playing Sunny’s father Shambhu Nath, a cancer battling man who comes to Mumbai in the hopes of getting better treatment. In an intensely narrated drama, Mr. Puri brought out the much needed empathy towards himself and made his viewers shed a tear banking on his acting alone. His hospital scene with Sunny where he discovers he doesn’t have much time left will melt your hearts to tears without a doubt.

Before we make our top pick, here are some of the honorable mentions since we know it’s not easy to sum up Amrish Puri’s career journey in a few numbers. While there are several of the positive shades that still could make the list, here are some of his performances that came too close to make it to the list: 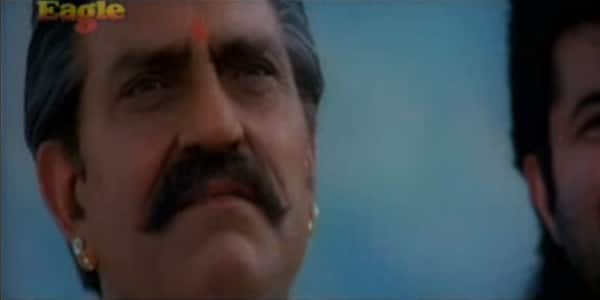 At number 1 is Priyadarshan’s directorial drama Virasat. One of his most heart piercing performances ever, Virasat had Amrish play a character that’s at a conflict of understanding with his foreign return son. Deservingly earning a filmfare award for this role, Virasat established him as an actor who could be at his best at any given shade of acharacter. He with this simple display of emotions convinced his audiences that Virasat belonged to him more than anybody else.

Also Read: This Tribute To Amrish Puri Is Nuts

Having worked in hundreds of movies crossing over the international boundaries in a career spanning almost 40 years, while it’s almost impossible to rank his invaluable work into words, we probably thought it’s a moment to celebrate his positives, his existence as a complete actor!

Agree with our choices?

Updated: June 22, 2019 04:57 PM IST
Get personalized recommendations on what to watch across 50+ OTTs only on
About Author
Yatharth Chauhan