So I had a Tweedledum and Tweedledee of a weekend watching RUSTOM and MOHENJODHARO (where one is just dim and the other mighty dumb); and it’s a rare two movies in one day feature that has one looking up nuggets like Division of Financial Assets At The Time of Partition (like seriously how much was it that the Indian defense budget in ten years time could allow for the Indian navy—actually going further down that ladder, the purchasing committee to siphon off enough free cash acquiring goodies where you could offer INR 5 crore JUST AS A CUT) . Also Whether The Indus Civilization Consecrated/Embalmed /Buried Their Elite/Let Them Flow Down The River or Were They Cremating Them? 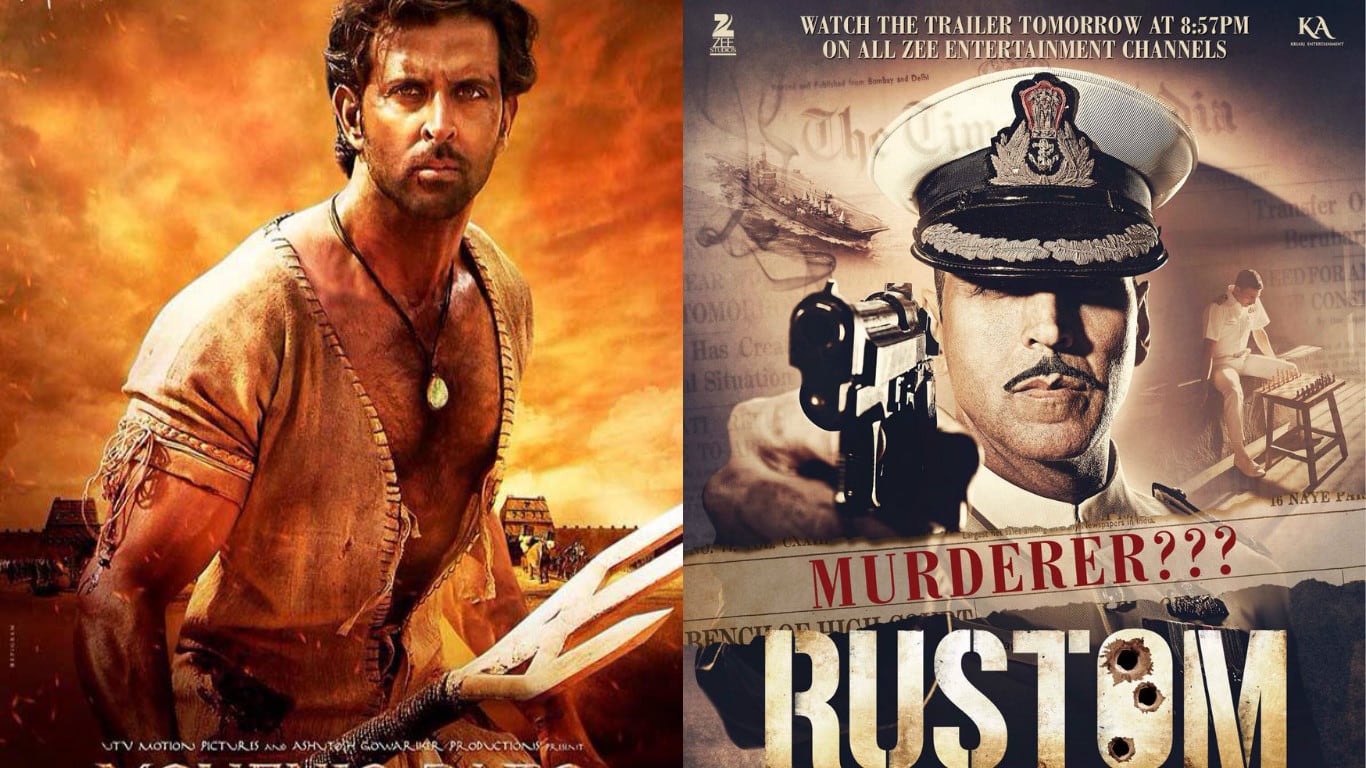 Let me just say that the two films have the sheer privilege of making the other look good. Childhood memories of Cinderella ’s two aesthetically challenged step-sisters coming up. But what they also share is a very narrow vision of female agency; which I think was my biggest grouse yesterday evening.

But first things first. It took for a very lazy team to think up  50s India as some crazy afternoon out on the Mad Men set—seriously 50s India was not getting its popular culture clues from all things Americana, not to that extent. That visual excess, the consumption, that big hair and serenade to satin came much much later, love. I understand that dusting down a book or going through archives may be too much for an assistant but couldn’t anyone look up how India was loving and living in 50s Indian cinema? I look at the confident naval officer and his wife on their (perfectly Instagrammed) European honeymoon and I think of that other Indian in uniform on his honeymoon,  (SANGAM’s Sundar from IAF)—ironically both will soon return to India and alleged infidelity, but that’s where the commonalities end. I had to ask around whether that generation ever claimed the beaches and the vales like what I saw just happening? Rustom Ji, tussi chaa gaye! And it just went on.

I really don’t want to get into the ridiculousness of Priti and Vikram Makhija’s sartorial choices. A newspaper headline screams about Vikram’s voodoo practices and you see the hapless Cynthia stumbling around in a daze. You wonder whether she has been bewitched; hell ya! Vicky Boy’s jackets are enough to blind anyone into submission. Vicky’s towel does it’s own Draupadi sari—refusing to come undone and give us the money shot. Rustom kindly offers a crotch shot as a consolation prize but a “purzey tou theek hain” from the investigating officer just ruins that for us. This film had quite a bit of the ‘show show followed by now tell tell’ school of filming—Cynthia has to wear a Sita Saffron sari as she crosses her lakshman rekha following that golden deer of Vikram’s blingy jackets. Cynthia Savitri bus thodi se phissal gayi, and she will literally slip into infidelity, twisting her ankle. Jeez! And then her regret, her regret. Don’t be taking the fun out of a young woman who may have looked for love elsewhere.  It is left to Priti to berate her poor lawyer with “Public Ka Dhyaan Kidhar Hai” in a scene where in that netted Cleavage Leverage of a dress, we all know where the public is focusing. I know it is her colleague Illeana D’Cruz’s song but if ever there was a GIF of each shot in the film where Priti slow walks/smokes/lounges into the frame with a“PALAT…Tera dhyan kidhar hai Ye tera hero idhar hai” playing in the background; I would pay good money.

There is a quite a bit of the palat in MOHENJODHARO too with a Sarman and Channi willing the other to turn around ala DDLJ . This too has a father who has betrothed his young daughter into marriage to an evil kid with a roving eye who moves around in his own chariot. But more than thepalat I was worried about the palate.

MOHENJODHARO is a movie where semblances of the four legged horned creatures just like female agency appear to disappear. We see all these fantastic antlers and horns as headgear and masks but Where Is The Meat? There is no venison, no mutton, and no let me just say it out aloud, beef. There are these fantastic plumes and shells but then just tandoori chicken and papaya on the table( At this stage I would have been OK with some bateyr/quail and Amritisari fish Tikka too). This is not BAJRANGI BHAIJAAN where the appetite of the carnivore can be whetted with  a “De kitchen se aawaaz chicken kukdu-ku. Teri bhook ka ilaaj chicken kukdu-ku”. I saw Bedi and Arunodhay Singh’s doley k sholey.  Hell, we even saw Orientalism Redux in Early Afridi Savage Man –they didn’t strike me the sort of people who wanted to eat papaya for fiber and I Don’t Eat Non Veg But May I Can Spoon Some Of The Curry From The Side which just leads me to believe that the Indus civilization just got crushed under a huge pile of undiscovered putrid meat. There is the curious matter of daughters who may walk up to light the funeral pyre but  then none of the women make it to the spontaneous mahasabha. Couples have 'milan' rather than constricting marital contracts but we still see Chaani not expressing free will when it comes to choice of partner. Chaani is the repository of  Shakti  and spiritual power of the Sindhu River; but at best we see her threatening to turn a Roadside Romeo into a frog or performing a sangeet number at the Full Moon Festival which had all the solemnness of the city’s Page 3 lot lounging at The Lodhi poolside. Sheesh!

But Gowarikar got one thing right. Current day Pakistan do have their antecedents in Mohenjodharo-vaasi . A ten minute coup removes one evil dictator but they are quick to push someone else to the throne; he begs off and says Let The People Rule And May a Hundred Flowers of Democracy Bloom and some such stuff..but nah! five minutes later they have placed their faith and all power unto another ill trained authoritarian. Hrithik/Sarman’s only experience negotiating the river so far had been those awkward moments in the opening scene as he hams it out scanning the horizon and you half expect Kangana to reach out of the river and go thwack . Now this stranger who for all purposes has been trained as a farmer, thanks to his Hum Inke Daddy Ko Jaante Hai  is now trusted to turn engineer and emergency management practitioner (And later on manage The Great Big Migration and Discoverer of That Other Great River) Carry on then.

Updated: August 15, 2016 03:15 PM IST
Get personalized recommendations on what to watch across 50+ OTTs only on
About Author
Aneela Zeb