Counting down the reasons that make 1994 blockbuster Hum Aapke Hain Koun iconic will probably take the entire day to count. The film not only set the bar higher for Bollywood family entertainers but also remains one of the most memorable films in modern times. From the music to fashion trends Hum Aapke Hain Koun was trendsetter all the way. Madhuri Dixit ’s purple saree from the song Didi Tera Dewar Deewana, for instance, was not just a sensation in India but across the world after the film released 25 years ago. 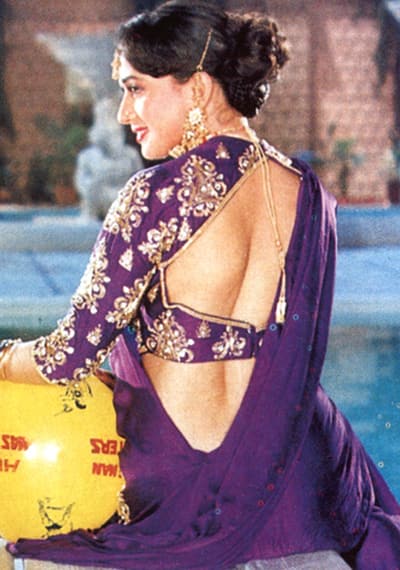 The look was so iconic that posters for the film were later reprinted with Madhuri sporting the look. Designer by Anna Singh the saree was one of the most expensive costumes in the film. The outfit is reported to have cost a staggering Rs. 1.5 million!

The backless blouse became a designer trend too and the overall look has been a part of many Bollywood movies referencing back to Hum Aapke Hain Koun. Farah Khan and Boman Irani ’s ‘Shirin Farhad Ki Toh Nikal Padi’ also featured the same look on its poster. Hum Aapke Hain Koun no doubt changed the lives of the entire cast overnight, including superstar Salman Khan whose career took a slow start but was put on track by this one movie. Madhuri who was already a star got so much appreciation for her portrayal as Nisha that painter M.F. Hussain who was a big fan of the actress watched the film 85 times.

The film completes 25 years since its release and no doubt is a big milestone for Bollywood to celebrate. Sooraj Barjatiya the maker of the film will celebrate the occasion holding a special screening of the film next week.

Updated: August 05, 2019 12:28 PM IST
Please Subscribe us OnGoogle News
12 OTTs. 1 App. Subscriptions start at Rs 50/month *Billed annually
About Author
Arunita TiwariEditorial Team Desimartini
A binge-watcher living by the motto ‘just one more episode’ till I realize it is 4 am. During the day busy writing to tell you all about it.