Jonas Brothers’ What A Man Gotta Do Song: Nick Jonas And Priyanka Chopra Groove Without Pants In This Foot-Tapping Number!

Jonas Brothers’ What A Man Gotta Do Song: Nick Jonas And Priyanka Chopra Groove Without Pants In This Foot-Tapping Number!

The latest track by the Jonas Brothers is here. Called ‘What A Man Gotta Do’, this one is a foot-tapping number that will make you shake a leg; but we are equally hooked to the video that shows the amazing chemistry between the three Jonas couples!

Well, as Indians, what obviously had been most exciting was to see Priyanka Chopra and Nick Jonas . Their chemistry is as sizzling as ever. It starts off with Nick dancing for Priyanka and seducing her, without his pants. But as we soon find out, both of them have let go off their pants as they chill and dance like a boss at home. Nick and Priyanka  get equal footage as Joe and Sophie who dance as a couple participating in a talent show. We have Sophie Turner in double role here, as the goody two shoes girl in white and the naughty goth lady in black! 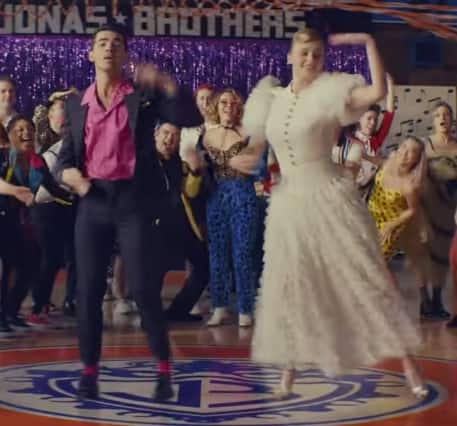 Kevin and Daniella keep it to minimum screen space, but their chemistry shines even in the brief moments. All in all, this one’s a song you’ll hear on loop. This one’s a feel good, feet tapping romantic number! Check out the video here:

Did you like the song as well? Let us know in the comments.

Updated: January 17, 2020 11:05 AM IST
Please Subscribe us OnGoogle News
12 OTTs. 1 App. Subscriptions start at Rs 50/month *Billed annually
About Author
Zinia BandyopadhyayEditorial Team Desimartini
Watches films and series, and always has an opinion on them. Loves to talk in front of the camera, and sometimes off it. Ambivert who craves entertainment. Sucker for drama and hates monotony.