Kangana Ranaut Lashes Out At Uddhav Thackeray After He Calls Her 'Namak Haram': You Are The Worse Product Of Nepotism

Kangana Ranaut Lashes Out At Uddhav Thackeray After He Calls Her 'Namak Haram': You Are The Worse Product Of Nepotism

Thackeray did not take any names but speaking of Sushant’s death and the subsequent probe he said, “Those crying for justice for Bihar’s son are indulging in character assassination of Maharashtra’s sons.” He also addressed Kangana Ranaut’s jibe on the city of Mumbai calling it Pakistan occupied Kashmir in her tussle with politician Sanjay Raut.

"Those who don’t even get proper food in their state, come here, make money and then become namak-haram by comparing Mumbai with POK & defame the state, its leaders and the police department. We all are proud of Mumbai police,” Thackeray said in his speech.

Kangana Ranaut had a response to Uddhav Thackeray’s attack on her in his speech and took to Twitter writing, “Raut called me Haramkhor now Uddhav called me namak haram, he is claiming I won’t get food in my state if Mumbai does not give me shelter, shame on you I am your son’s age this is how you speak to a self made single woman, Chief Minister you are the worse product of nepotism.”

Taking her claim further in another tweet the Manikarnika actress wrote, “Chief Minister I am not drunk on my father’s power and wealth like you, if I wanted to be a nepotism product I could have stayed back in Himachal, I hail from a renowned family, I didn’t want to live off on their wealth and favours, some people have self respect and self worth.” 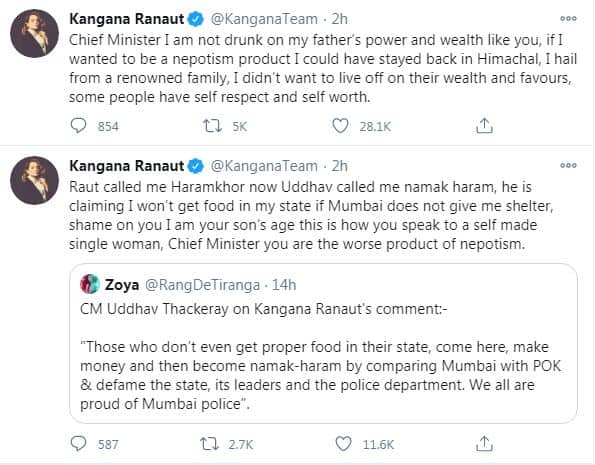 The actress also posted a video reiterating these facts and called out Uddhav Thackeray for diving the nation because he wanted to vent out anger against her. She also said that the self proclaimed custodians of the constitution came forward to abuse her when she compared Mumbai to PoK but no one said a word at the Maharashtra CM’s derogatory speech.

In another Tweet, Kangana responded to Uddhav Thackeray saying that those who don’t find work in their own states come to Mumbai and wrote,” Just how beauty of Himalayas belongs to every Indian, opportunities that Mumbai offers too belongs to each one of us, both are my homes, Uddhav Thackeray don’t you dare to snatch our democratic rights and divide us, your filthy speeches are a vulgar display of your incompetence.”

Updated: October 26, 2020 01:34 PM IST
Please Subscribe us OnGoogle News
12 OTTs. 1 App. Subscriptions start at Rs 50/month *Billed annually
About Author
Arunita TiwariEditorial Team Desimartini
A binge-watcher living by the motto ‘just one more episode’ till I realize it is 4 am. During the day busy writing to tell you all about it.