Sushant Singh Rajput had died on 14th June. After his death, his girlfriend Rhea Chakraborty had been silent. She did go to the hospital where he was taken but was not present at his funeral. She was apparently barred by the late actor's family members. A few days back, Sushant's father had filed an F.I.R against the actress in Bihar. After that, she had posted a video where she said she has full faith in the justice system and that truth shall prevail, in a tearful voice. Now her Jalebi co-star  Kajol Tyagi has reacted to it.

Commenting on the video, Sushant's friend  Krissen Barrito has slammed the actress and wrote, "After he started dating this female he was not allowed to be in touch with any of us !! All of his friends !! His numbers were changed and we all know that ! We all tried reaching him but we could not! The statement from his dad says she didn’t even let him talk to his family! @rhea_chakraborty yes the truth will be out we will make sure! Satyamev jayate back at you!" 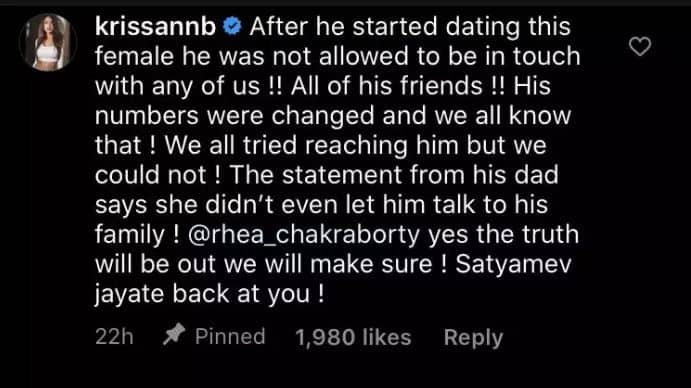 To this, Kajol Tyagi, who claims to have worked with Rhea in Jalebi said, "I’m insanely proud of you for commenting I was part of jalebi before it went for the reshoot and shot with her for a couple of weeks and I remember Rhea oozing negativity. Literally. I mean in this video also keeping hands folded so that body language experts have a harder time? Well it’s evident she’s faking grief."

In an interview with Spotboye, Krissen has said, "Me, Sushant, his sister and his brother-in-law (both are lawyers by profession) were all chilling at his Pali Hill residence where he used to reside before this. But then suddenly he cut off from all of us, his number changed and his address changed. And it all happened after he started dating this girl Rhea. We were under the impression that he is very much happy with her and that's why he doesn't want to be in touch with us." She also added that she doesn't believe he was in depression.

Updated: August 01, 2020 08:42 PM IST
Please Subscribe us OnGoogle News
12 OTTs. 1 App. Subscriptions start at Rs 50/month *Billed annually
About Author
Zinia BandyopadhyayEditorial Team Desimartini
Watches films and series, and always has an opinion on them. Loves to talk in front of the camera, and sometimes off it. Ambivert who craves entertainment. Sucker for drama and hates monotony.