One of the most popular couples in the celebrity circles is finally happily married. Zaheer Khan, one of the greatest fast bowler India has ever seen and Sagarika Ghatge, the determined Preeti Sabarwal from Chak De India, tied the knot today at a Mumbai Court. 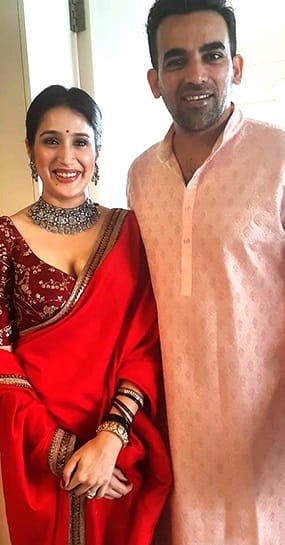 The couple's marriage is another addition to the long list of marriages between two of the most popular entertainment sources, Cricket and Bollywood. Sagarika and Zaheer were in a relationship for 2 years and according to Sagarika, she was surprised when Zaheer popped the question during one of their romantic gateways in Goa during the middle of an IPL season.

Zaheer Khan also said that their families supported their decision and blessed the couple. The couple got engaged on 24th April 2017. Zaheer Khan's close friends Yuvraj Singh, Ajit Agarkar and Ashish Nehra will also be present for the cocktail party after the marriage and a Mehendi ceremony will also be held today and then there will be a star-studded reception on Sunday.

The social media is also abuzz with one of the most awaited weddings of the year and Sagarika's co-star from Chak De India, Vidya Malavade shared the pics of the bride yesterday along with a beautiful wedding invitation.

Desimartini also wishes the newlyweds a happy married life ahead!