Trivia: Did You Know Ajay Devgn Had Directed Bobby Deol Along With Vikram Bhatt?

Trivia: Did You Know Ajay Devgn Had Directed Bobby Deol Along With Vikram Bhatt?

Ajay Had Directed Bobby In A Video

Ajay Devgn has been one of those few actors who has managed to stay relevant for over three decades. He started off humbly, as a child artist and then focused on his education, till he landed up the lead role in Phool Aur Kaante in 1991. While ajay had signed the film on the insistence of his late father, Veeru Devgan, he had  been resolute that we wouldn’t be a part of the industry if the film fails to do well. It was a hit and the rest is history!

But did you know that Ajay Devgn was a part of a very filmy group, where he would act, direct, edit and even be the cameraman? The group constituted of Bobby Deol, Vikram Bhatt, Atul Agnihotri, and Samir Arya besides him. Talking to HT Café in an interview, he had earlier said, “My dad was keener that I become an actor, so he would make me practise stunts. But I was more keen to be behind the scenes. At 13, I started making my own video films and by 17, I was making my own short films and also assisting directors. When Kuku Kohliji offered me Phool Aur Kaantein (1991), I accepted at dad’s insistence and quietly thought that if the film flopped, I wouldn’t make the rounds of producers’ offices with portfolios. As it was, I was happy, enjoying my college days and making films. I was a part of a group of friends including Vikram Bhatt, Sameer Arya, Bobby Deol and Atul Agnihotri, and between us we would make movies, act, direct, edit and be the cameramen too.” 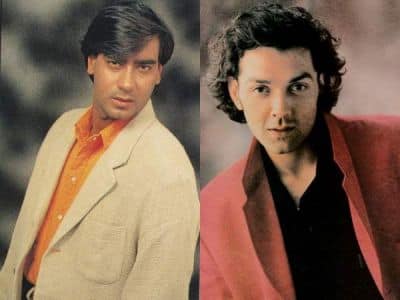 In fact, his first work was as a director and he directed Bobby Deol for a video in college. The short video was shot in Khandala and has songs and action sequences too. Vikram Bhatt co-directed it Lubna Siddiqui was opposite Bobby!

Bobby and Ajay had been such good friends that the former actually holds a lot of secrets of the latter. The two had later come together for Tango Charlie.

Updated: April 01, 2020 04:38 PM IST
Get personalized recommendations on what to watch across 50+ OTTs only on
About Author
Zinia BandyopadhyayEditorial Team Desimartini
Watches films and series, and always has an opinion on them. Loves to talk in front of the camera, and sometimes off it. Ambivert who craves entertainment. Sucker for drama and hates monotony.